Howard Washington Thurman (1899–1981) played a leading role in many social justice movements and organizations of the twentieth century. He was one of the principal architects of the modern, nonviolent civil rights movement and a key mentor to Dr. Martin Luther King, Jr.

Jesus and the Disinherited demonstrates how the gospel may be read as a manual of resistance for the poor and disenfranchised. Jesus is a partner in the pain of the oppressed and the example of His life offers a solution to ending the descent into moral nihilism. Hatred does not empower–it decays. Only through self-love and love of one another can God’s justice prevail.

If you would like to join us, the series will begin on Wednesday, February 24 at 7:00 PM and continue weekly for 5 sessions. The sessions will begin with a short compline. Please contact Lisa at zboustcha@hotmail.com or Sandra at sandraciganic@hotmail.com.

For hundreds of years Blacks have contributed much to the fabric of this country and yet their achievements and contributions are not well-known or recognized.  Canada has had Blacks on its shores long before Confederation.  In 1608 an African Mathieu de Coste became the first recorded Black person to arrive in Canada.  He had come to serve as interpreter of the Mi’kmaq language to the governor of Acadia. In the 17th and 18th centuries Acadia or Acadie (in French) belonged to France and included southeastern Quebec (the Gaspe), eastern Maine, New Brunswick, Nova Scotia, and Prince Edward Island. In 1628, Olivier LeJeune was recorded as the first enslaved African to live in New France. Since that time, Black people have arrived from the United States as Black Loyalists, as Freedom Seekers, as entrepreneurs trying to take advantage of the offer of free land in Saskatchewan to begin settlements there.  We must not forget the Draft Dodgers who escaped north to avoid fighting in the Vietnam War. They have come from the Caribbean and other parts of the diaspora and from Africa. We celebrate these pioneers and continue to tell these stories as part of our commitment to educating ourselves about these people. 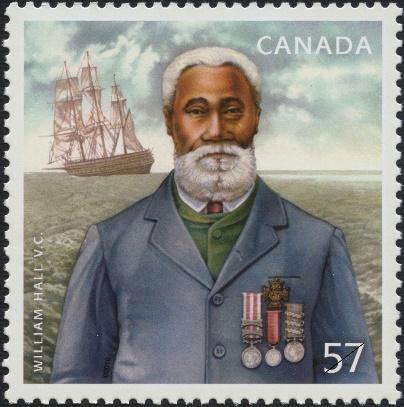 William Hall grew up on the banks of the Avon River. His father, one of the black refugees brought to Nova Scotia during the War of 1812, became a sailor and worked at the shipbuilding yards at Half-Way River (Hantsport). In 1844 young William joined the crew of a vessel sailing out of Half-Way River, and during the late 1840s he apparently served in the American navy. Hall enlisted in the Royal Navy as an able seaman in February 1852, and was in the battleship Rodney for four years. During the Crimean War he took part in the siege of Sevastopol (Ukraine) as the captain of a gun in the siege batteries, and was present at the battle of Inkerman. In 1856 he was assigned to the frigate Shannon which was sent to Calcutta when the Indian Mutiny broke out in 1857 and then to the relief of Lucknow, then besieged by mutineers.  He secured the British garrison in Lucknow and was one of two sailors to survive the attack but the only one able to continue to fight. He fought until the garrison was safe.

Hall was presented with the award on 28 Oct. 1859, the first black, the first Nova Scotian, and the first Canadian sailor to receive the decoration. By that time he had become captain of the foretop.  Hall retired on 10 June 1876 with the rank of quartermaster and a certificate of good conduct, and he settled on the family farm near Hantsport. When interviewed in 1900 the ageing man thought little of his glories or the Victoria Cross. As he said, “It isn’t worth very much . . . after all, only ten pounds a year. If it wasn’t for my regular navy pension of forty pounds a year besides, I don’t know how we’d get along here. The farm is small, and my two sisters live with me.” In October 1901 he emerged briefly from obscurity when he was presented to the Duke and Duchess of Cornwall during their visit to Halifax. Upon his death in 1904, Hall was buried without honours at Lockhartville. In 1945 his remains were reinterred in the grounds of the Hantsport Baptist church, and in 1947 a commemorative cairn was erected by the Canadian Legion on land it had purchased. The cairn is one of a number of memorials, several of them created by the black community of Nova Scotia, which perpetuate the name of William Hall, vc.

Most of us do not know of the great men and women who made significant contributions to Canada and the rest of the world. We do not know of the great kings and queens and the great kingdoms that they possessed– societies and governments–models which were later adapted to European societies.  We need to tell our stories.  It is in the storytelling that we learn the truth about ourselves and begin to value the great gifts with which our Creator has blessed us. We need to know our history.  It is in our history that we learn about the contributions that Mother Africa made to humankind. “Until the lions have their own historians, the history of the hunt will always glorify the hunter.”  Our narrative is much more than gun violence and negative press.  It is the story of peoples who despite violence visited on them, cultural genocide wrought on them, the right to have access to learning barred from them, still produced remarkable human beings.  This is the story of one of them.

Have you heard of Anderson Ruffin Abbott?  Chances are that you have not.  You have however heard of President Abraham Lincoln.  How are these two men connected?  Well, Dr. Anderson Abbott was one of the medical surgeons attending the dying President Lincoln.   I was told at the Black National Historic Site and Museum in Buxton, Ontario that Mrs. Lincoln was so impressed by Dr. Abbott’s efforts to save her husband that she gave him a gift of a blanket.  Anderson Abbott was born in Toronto, Upper Canada on April 7, 1837.  His parents, Wilson Abbott and Ellen Toyer, free Blacks owned a successful business in Mobile, Alabama but left to avoid the racist atmosphere there.  Eventually they moved to Toronto where, because of their outstanding work ethics acquired wealth and standing.  Anderson Abbott attended the prestigious and racially integrated Buxton Mission School located at the site of the Black Nation Historic Site and Museum.  Many black alumni both male and female went on to make their marks in the world. You see their photos proudly displayed at the historic schoolhouse.

He studied at the Toronto Academy where he was an honours student, attended Oberlin College in Ohio and at the age of 20, enrolled in University College in Toronto to study Chemistry.  A year later, he began his studies at the Toronto School of Medicine (which later became affiliated with the University of Toronto).  He had a supervised placement with Dr. Alexander Augusta, the first black doctor in North America and the head of the hospital (now known as The Toronto General Hospital).  In 1861, Abbott was licensed to be a doctor “becoming the first Canadian-born person of colour to graduate from medical school.”

On his return to Canada, he eventually settled in Chatham, was appointed Coroner for Kent County, and advocated for integrated schools.  In 1896, he became the Medical Superintendent of Provident Hospital in Chicago , a training hospital for Black nurses. He returned to Canada in 1897 and spent the rest of his life writing about Black History and other topics.  He died in Toronto on December 29, 1913 in Toronto, Ontario.
Yarhi, Eli, “Biography Anderson Ruffin Abbott.” Encyclopedia Britannica  https://www.britannica.com/

Cool Fact: One of the best local coffee shops in Parkdale, The Abbott on Spencer Ave., is named after Dr. Abbott.

Prayers for use During the Coronavirus Outbreak

The Church of England has produced an excellent prayer resource for use during the pandemic. The booklet includes prayers about the outbreak, personal prayers, prayers with children, and a pattern of daily prayer.

The resource can be downloaded here.
It is also available in other formats on the C of E website.